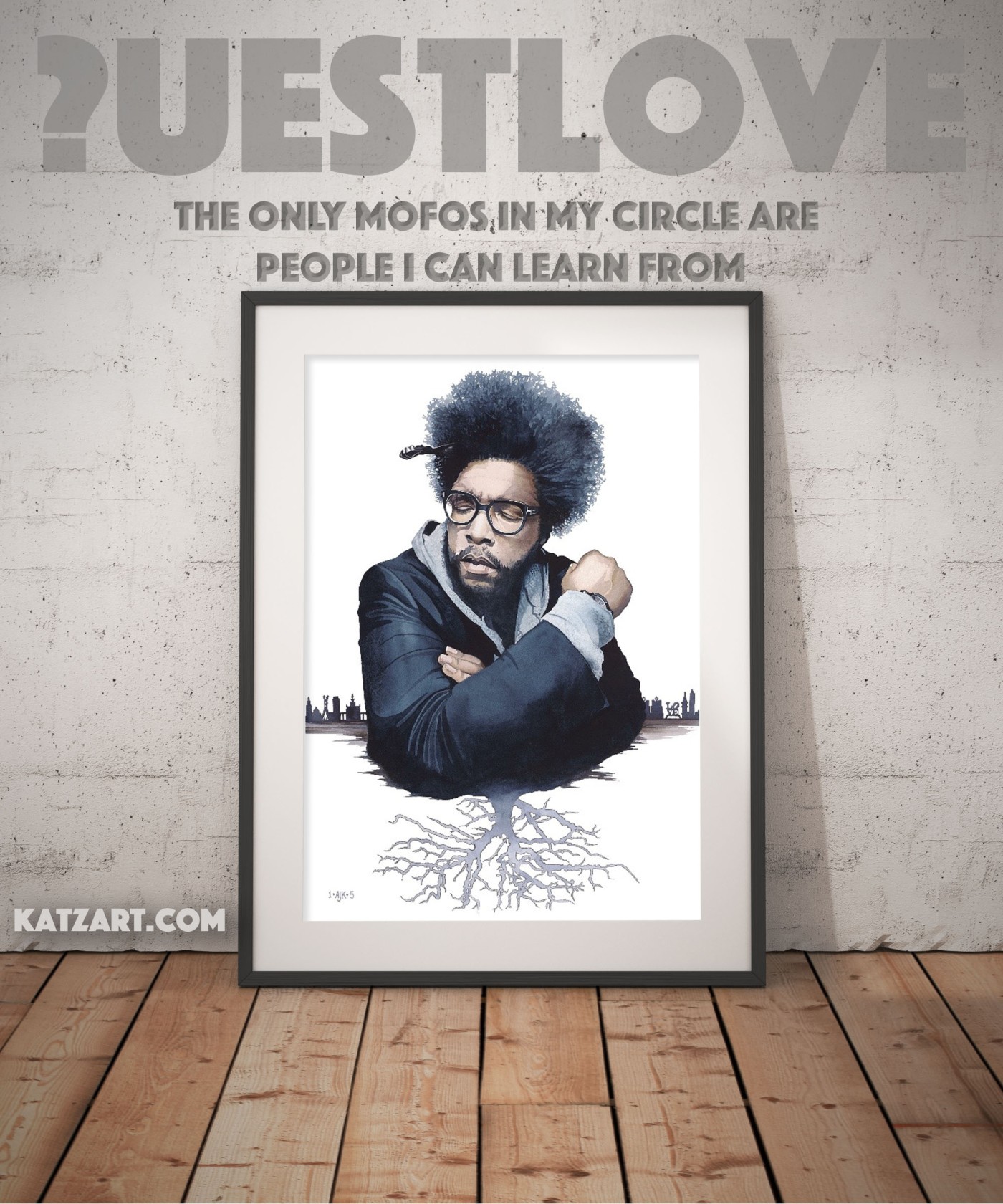 “We’re living in some times that’s the craziest /
They say these legislators are the laziest /
Dedicated religious figures have gone atheist /
Each and every thing must change, there’s no escaping this”

In the winter of 2015, I was fortunate to get tickets to see The Roots at Fillmore Silver Spring, in Maryland.  I had plenty of lead-time, and the show date fell on a night towards the end of a lengthy break for the holidays.  I challenged myself to make two portraits for the show, deciding to experiment with composition and media.  While I had been satisfied with many of my watercolor portraits, I wanted to get out of my comfort-zone, and try some new approaches.

I had been playing around with making drawings on butcher paper; a brown surface, with the consistency of a paper bag.  I really liked being able to work the surface with a full range of graphite pencil, only to then heighten the image with white charcoal.  Using the brown ground as a middle value is distinctly different than working on a white surface. After a quick succession of portraits of Kool G Rap, Lord Jamar, Sadat X, Grand Puba, and Slick Rick, I decided to get more ambitious with the size and the level of experimentation.  I needed to find some large cardboard. 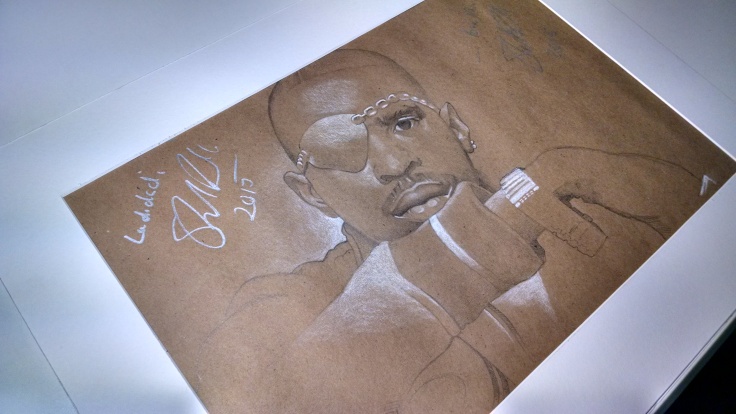 In order to save money in college, many student artists would forge relationships with appliance stores.  Once a refrigerator or washing machine would sell, the large cardboard box would be given to an artist for repurposing.  The inexpensive (or free, in many cases) cardboard provided a uniquely textured surface, and could be bent, cut, or torn.

I researched strong photographs of Black Thought, and selected a frontal, head and shoulders shot that was presented in black and white.  I wanted to work large, so I began with a full sheet of 32″ x 40″ corrugated cardboard. This would be the first piece in what I now call The Corrugated Cardboard Collection, a series of portraits featuring the icons of the Hip-Hop genre. 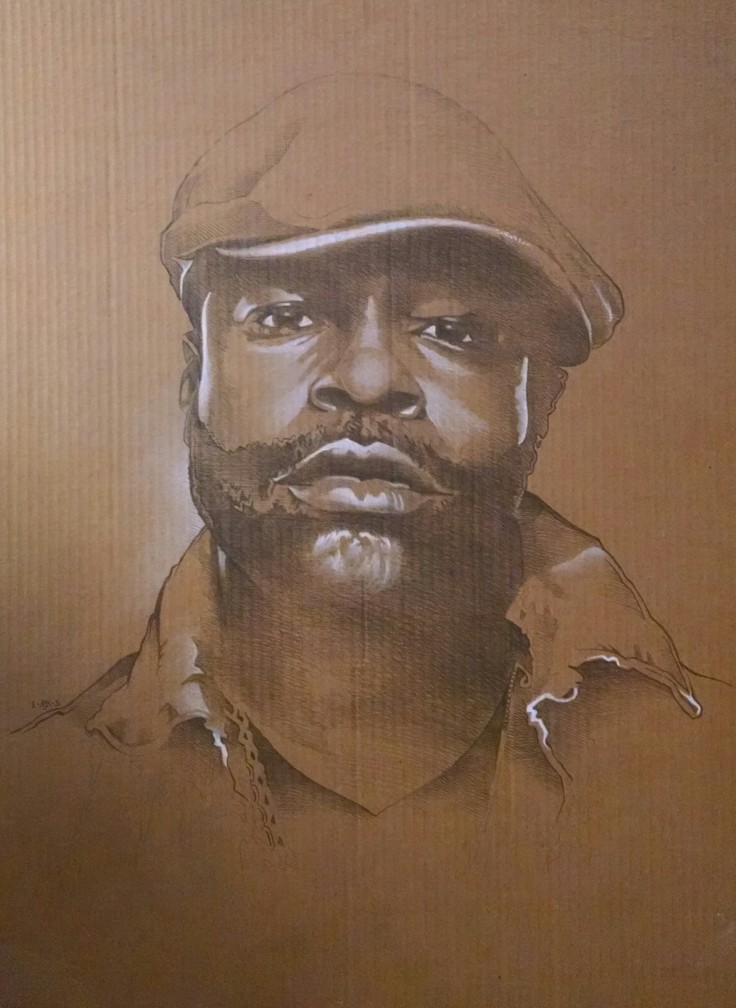 Feeling good about the Thought portrait, and riding the buzz of a successful experiment, I made plans to stay ambitious in my attempts to render Roots drummer, Ahmir ‘Questlove’ Thompson.  Instantly recognizable, and ‘cooler than the other side of the pillow‘, Thompson is a multi-talented, multi-faceted DJ, producer, and journalist.  He famously quipped – “The only mofos in my circle are people that I can learn from”. It’s this notion, along with an incendiary approach to making music, that captured my imagination and attention.  I was looking forward to the challenge of capturing his likeness.

I decided to paint a fresh, new watercolor, with the intention of including the Philadelphia skyline running along the background in silhouette. At the bottom of the portrait, a small space afforded me an opportunity to attach a series of roots to the torso of the figure. In this way, the piece had become a surreal tribute to the man, his band, and his city.

After sketching out the composition in a light, 4H pencil, I sought feedback through Twitter.  I blasted out details of the sketch, and was pleasantly surprised with the rich, useful, and thoughtful comments. Inspired anew, I began laying in the watercolor washes. 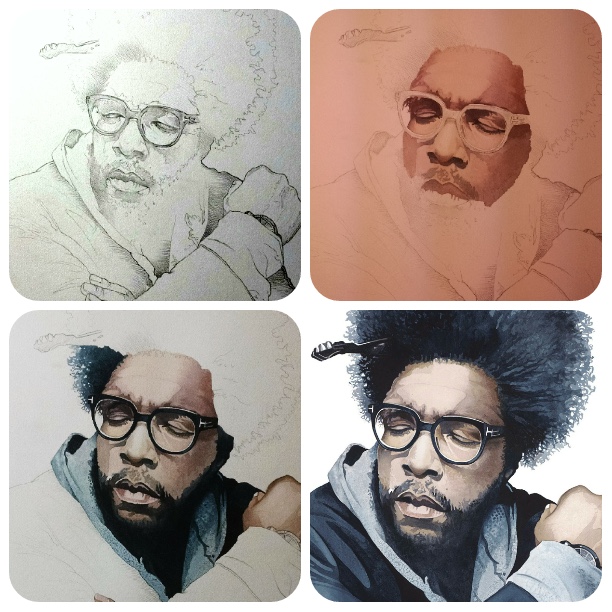 When the new painting was complete, I was satisfied that it represented the best of my technical abilities.  Many artists want to believe that their last work is their best work. In this case, I definitely felt I had reached a new level of accuracy. I  was looking forward to sharing this new composition, and getting it in front of Questlove.

Unbeknownst to me, my family had planned an incredible vacation down to the city of Asheville, North Carolina.  We would be renting a lake house and exploring the town. I was excited to go, and looked forward to crossing paths with my friend, Jay Myers. The only wrinkle in our plans was that I’d be in Asheville, while The Roots, Black Thought, and Questlove were in Maryland!   I began to problem-solve, and realized that I could come back alone a day early to take in the show.

After Christmas, we drove down to Asheville, taking our time and taking the most scenic route. Overall, it took about 10 hours, and I began to regret my decision to cut my vacation short. Asheville is a cool, little city, and I really liked the vibe and the people we met.

After a few days of leisure, I packed up and left my family and the lake house ,to make the long trek back to Maryland. I felt particularly guilty, as my wife had a bad cough and a fever by the time I departed. She’s always very supportive of my penchant for these art adventures, and assured me that I should get on the road.  I felt like an asshole.

This time around, I was by myself.  I buckled in, started the car, and loaded up a queue of great music. Over the many miles of straight highway, I ran through a dozen podcasts, and a ton of road-trip classics.  It was a beautiful but monotonous drive, and near the end, I was happy to see the familiar terrain and roads of my home state.

Back within sight of my artistic goals, I began to focus on the task at hand. I was meeting Malcolm, Mike from Philly, and my friend Keith, at the concert. We converged on The Fillmore, and picked up our tickets at will-call.  Upon our arrival, the crowd was already beginning to swell, and we decided to make our way to the stage area.  We posted up next to a short barricade that led to the backstage area.

The crowd filled in quickly, and we were pushed to the front, left-side of the stage. We would have a good vantage point, and we’d be able to see the band as they took the stage. The Roots put on an energetic, fun, and inspiring performance, using each member of the group to rile up the huge crowd.  I was particularly impressed with Black Thought and his command of the mic and the stage. I think it’s fair to say that he remains underrated.

During the show, Malcolm and Mike took turns encouraging me to hold up my work, and I, not wanting to block anyone’s view, declined.  Eventually, they took matters into their own hands and each took a piece of art from my portfolio.

As the Roots left the stage, Mike and Malcolm held up the Black Thought piece, and the J-Dilla ‘evolving watercolor’.  I held the Questlove painting.  We were able to catch their attention, and although there was a barricade separating us,  they moved closer to sign the work and mix it up. Black Thought was first, and I asked if he’d tag some lyrics on the drawing.  I had written down a couple of options, and I was just about to pull the paper from my pocket, when he held up his hand, looked at the ceiling, and said “Naw”.  I thought he meant that he wouldn’t write lyrics, but instead he was making his own choice.  He looked down at the work, and began to write. 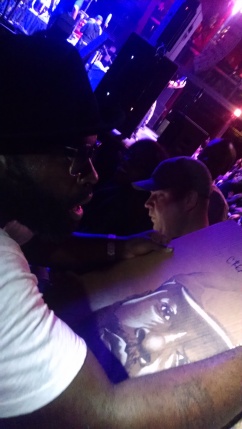 He chose lyrics from a song called Bird’s Eye View by Statik Selektah. The song features Raekwon, Black Thought, and Joey Bada$$.  It was the first time that someone tagging one of my portraits had made this kind of spontaneous decision.  It made it more meaningful.

Both Black Thought and Questlove added their signatures to the J-Dilla piece, and cemented the unique qualities of that work. I’m not sure where it will end up, but I’m extremely proud of tracking down so many of Jay Dee’s peers, contemporaries, and admirers.  It is a one-of-a-kind, and it represents the travel, hustle, and experiences attached to attending a live show with art  in hand.

We shuffled the paintings, and before he walked off, I handed the watercolor to Questlove.  I politely asked him to sign it, and he joked: “I don’t want to ruin it!”.  I said, “You could write whatever you want on there, and it would be great!”  After he held it up for a photo, he doodled a quick self-portrait and a signature. Then, he was on his way. 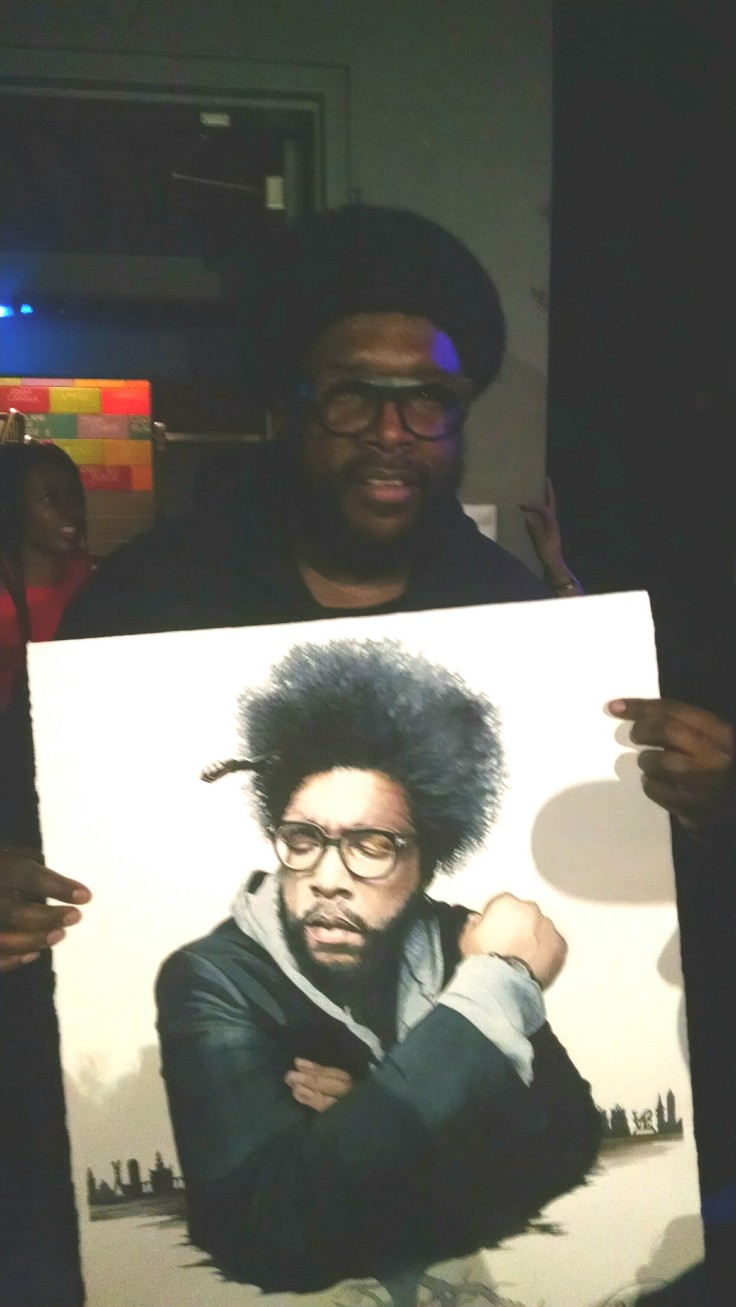 The show was over, and people began to disperse.  We decided to hang around a bit, to see if we could catch them again outside. We went around to the back of the venue, and almost immediately found Black Thought on the way to the bus.  He was posing for pictures, and hamming it up with a few concert-goers next to a short wall.  We pulled up, and thanked him for playing. We took turns getting some flicks, and joking around with him about just how many times I had posted my drawing on Twitter.  It was all in good fun. Just then, Questlove appeared, and took his time with each one of us. It was important to me to get a photo with both of us holding the painting. He was very patient, and participated in the back and forth of storytelling and compliments. 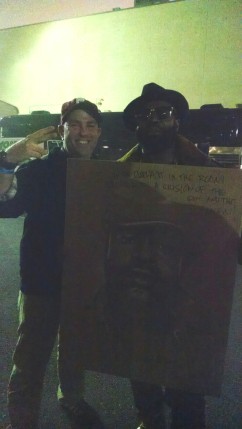 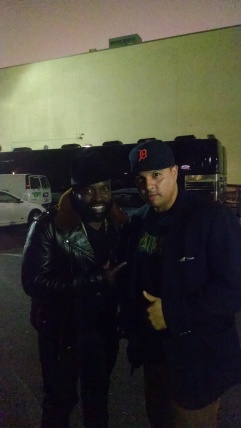 It was time to go, and I needed to get on the road. It seems that while we were at the show, Lisa, my wife, had taken an unexpected trip to the emergency room.  She needed an IV, and was diagnosed with pneumonia.  Obviously, I would be traveling back to Asheville in the early morning.

The contrast of the elation I felt for the experience of live music, coupled with the meetings of Black Thought and Questlove, and that of the panic and helplessness I was experiencing with Lisa in the hospital 450 miles away, evoked a strange tornado of emotions.

On my way back down to North Carolina, I was able to ebb my distress with fresh memories of good music and good friends.  By the time I arrived at the hospital, the prognosis was much more positive than when I had left.  They caught the pneumonia at an early enough point where it could have been much worse.  I’m writing this story about a year and half after it all happened, perhaps distancing myself from the worry and feelings of panic.  I’m happy to report that Lisa made a speedy recovery, and I was awarded with The World’s Worst Husband Award, for abandoning her when she needed me most. Fortunately for her, her parents, her sister, and my kids were there to see her through. It was a great day when she was released from the hospital and we took the drive back to Maryland.

Time has put a happy spin on these events, and although I still feel pangs of guilt for leaving for my art adventure, the story generates smiles and relief from all who were involved.

I’m glad it all turned out well. Grateful. – AK

Check out the American Riddle Podcast, as Malcolm and Meriem recap the event, and offer up some soundbites of conversation from the night…